The Dumpling (Tuen Ng) Festival on 9 June is a gazatted public holiday in Hong Kong.  As usual my shooting "kakis" brought me to another remote place at Yuan Lang 牛潭尾  in New Territory to hunt for two skippers.


Five of us met at Yuan Lang MTR station before boarding a five-seated taxi to the foothill of a mountain. The weather was cloudy with intermittent passing rain, yet there were many butterfly photographers looking for their targets - One of the targets was the Caprona alida 白彩弄蝶, commonly known as Spotted Angle. 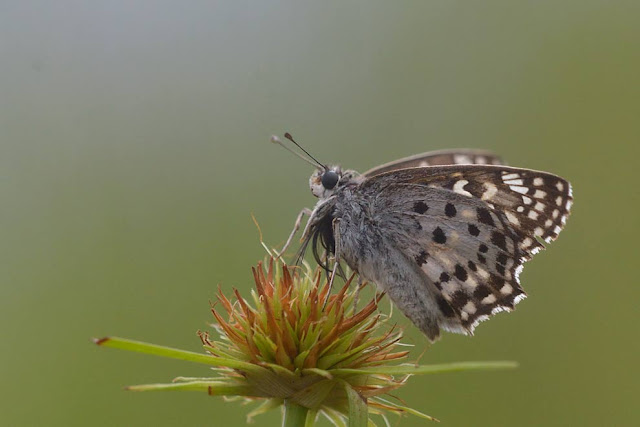 At my shooting position, I could not get parallel to the butterfly when it moved slightly - but this shot reveals more spots on the upperside of the forewing. 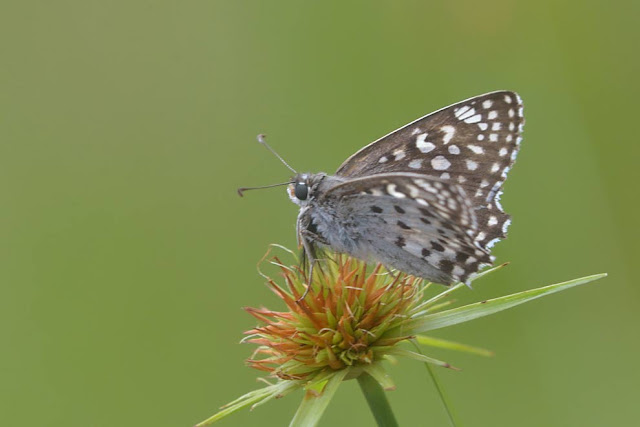 Now I went lower using  the cloudy sky as the background. With a bit of research on the internet, I realised that the distribution of Caprona alida is rather wide - from southern China up  to Thailand. It seemed that it  had a tendency to perch with wings partially folded. Getting a decent shot was a fuflilment for me especially when there was a big group of people crowding around it. 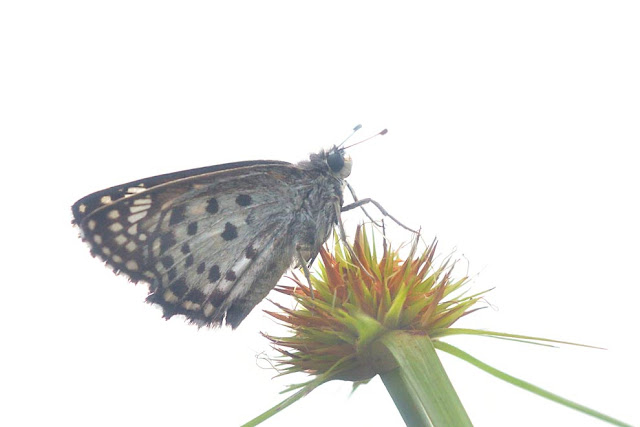 Later in the morning, I got a chance to snap a few quick record shots of  the uppersides of another specimen. 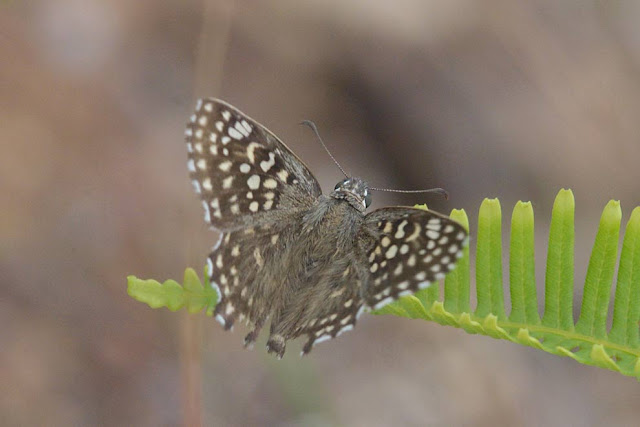 About 100 metres away from the Spotted Angle, there was another group of photographers queing up to take a small skipper, the Taractrocera ceramas 草黃弄蝶. I decided to join the queue. But it decided to change perch when I was second in the queue. I managed to snap  a long distance shot when I chased after it on a hill slope. 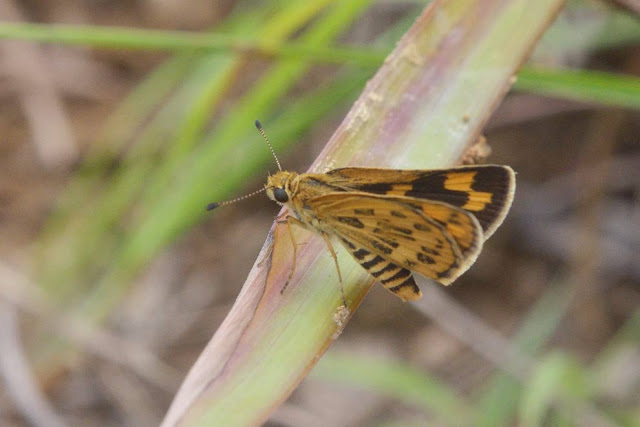 The dark clouds were congregting overhead rapidly, signalling us that the sky would open up anytime. When I noticed a "Ring" butterfly on the ground, I quickly took a few shots. It  looks lik theYpthima imitans (擬四眼矍眼蝶). Shortly after this shot, I had to rush for "tree shelter". 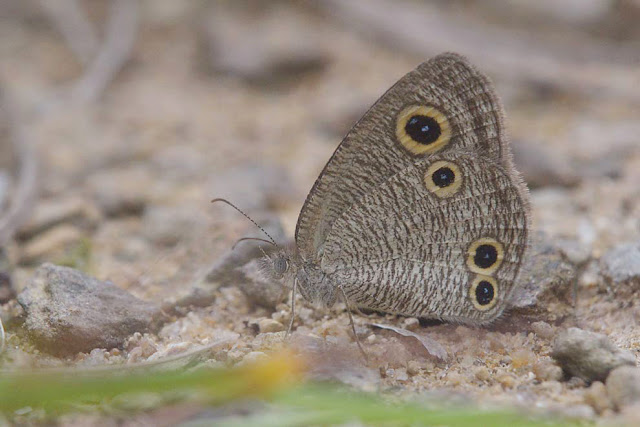 This Chilades pavada caught my attention while I was hiding under a tree. It was quite comical and challenging  when I had to shoot and hold an umbrella at the same time. 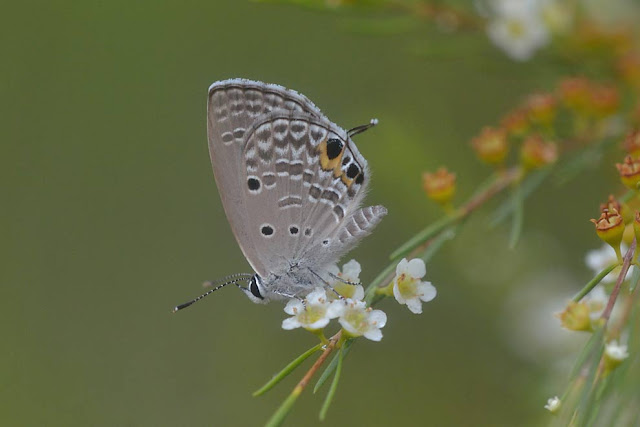 From far, I thought I had seen a T. ceramas  perching on a fern in the drizzle. But when I approached it nearer, I noticed it was  a Potanthus confucius (孔子黃室弄蝶). 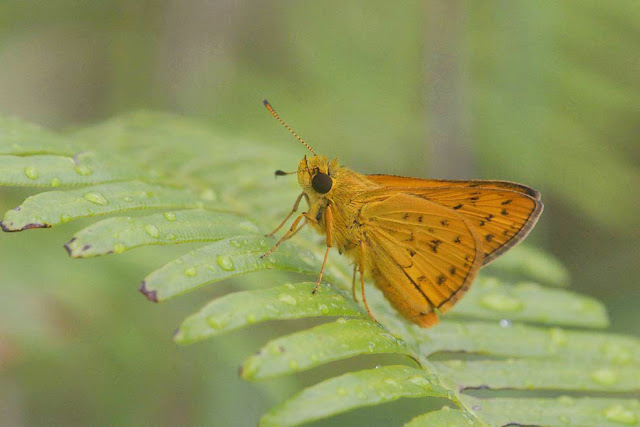 We decided to call it a day when we assessed that the rain was not going to become lighter. When we reached a tarred road at the base of the mountain, someone shoted 三斑趾弄蝶 in Cantonese. It landed on my sweaty shirt for awhile before it was "reset" and I had a chance to take this shot. 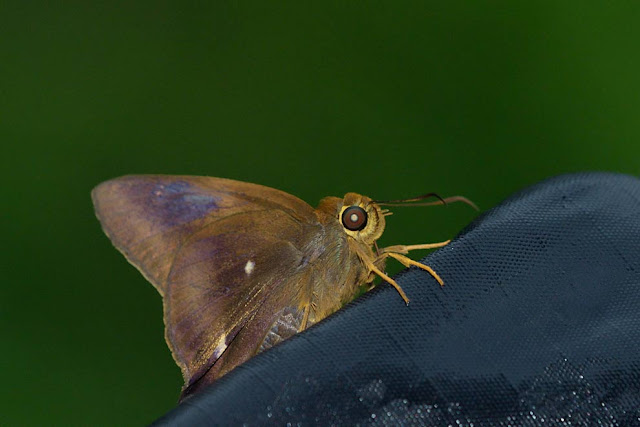 On my way home, I made a detour to the Aberdeen promenade to meet up with an ex-colleague and  immersed myself in a fun-filled and electrifying atmosphere of dragonboat races. It was my first upclose "participation" as a spectator of  a dragonboat race carnival.