Many thanks to Antonia for the transport and all the arrangement he had made for us (with Les and LC) to go on a 6-day butterfly-phtographing trip in northern Thailand. Les and us arrived in the late afternoon on 2 Nov on two different flights. We stayed one night at the The Dome Residence which is not too far from the Chiang Mai airport.

After Antonio picking up LC around 9 am at the airport next morning, we headed straight for the Tharnthong Lodges, situated in the vicinity of the Mae Takhrai National Park. We arrived at the lodge about an hour later. 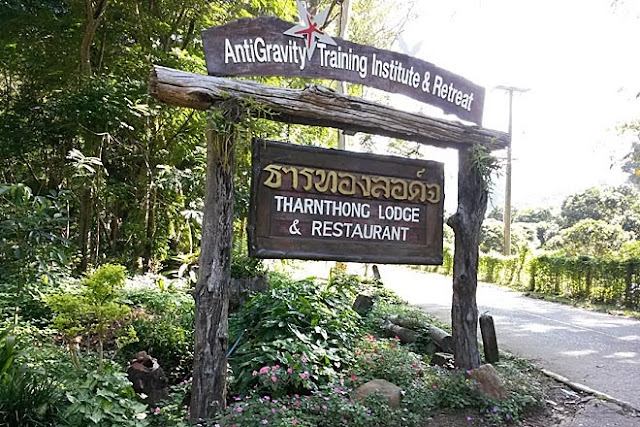 As the room was not ready, we started to look around for butterflies in the compound of the lodge. We sprang into actions with great excitement when an Angled Sunbeam (Curetis acuta dentata) was flitting across us. It took us quite awhile before we could get a decent shot. 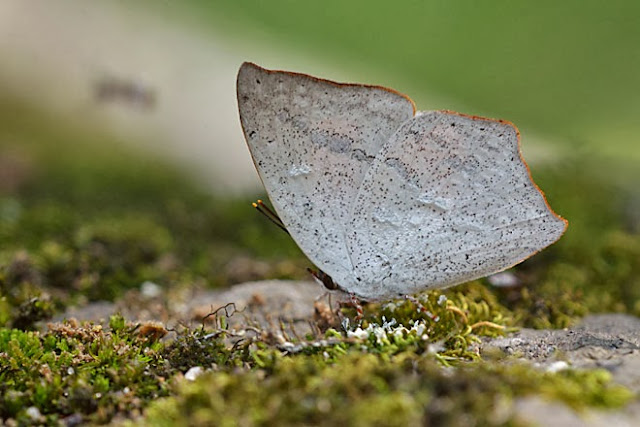 The fly in the background in fact landed in front of the Sunbeam. 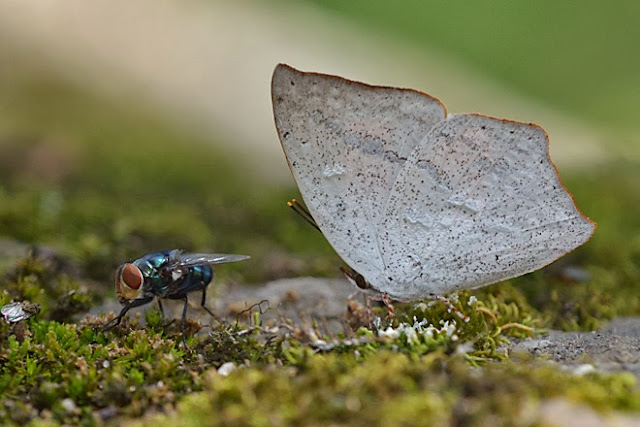 It stayed around the area for a while and occasionally it opened its wings partially showing us a glimpse of its distinctive upperside orange patches. 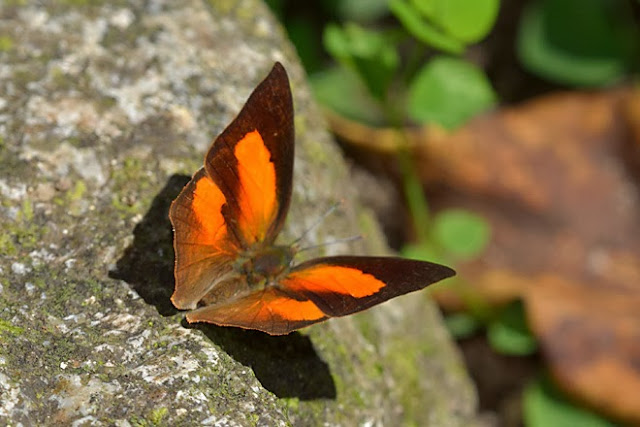 There were a few other butterflies fluttering around before noon. This skittish skipper, the Common Wight (Iton semamora semamora) allowed me to snap only two shots. 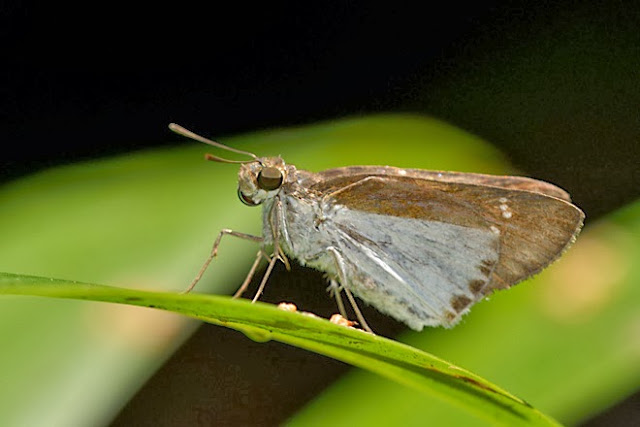 Another dark skipper, the Banded Demon (Notocrypta paralysos asawa) was found on a palm leaf. 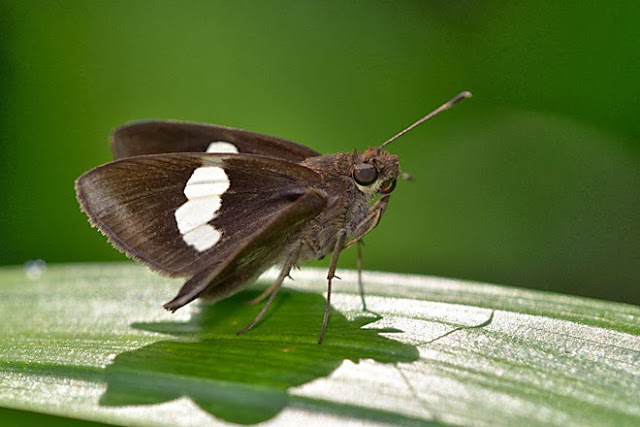 A pristine Silver Royal (Ancema blanka minturna) suddenly appeared on the ground in front of me before noon. Of course, without hesitation, I went down on my knee and took a few shots. 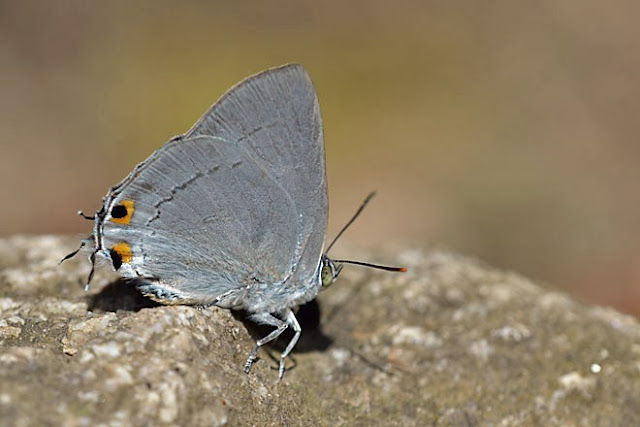 From a different angle, the silvery wings could be shown more clearly. 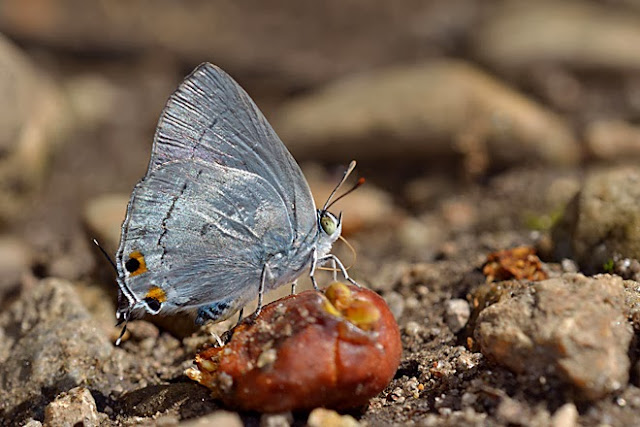 A rather alert female Plain Earl (Tanaecia jahnu) was flying around us. I snapped a quick shot when she was attracted by some dry fruits on the ground. 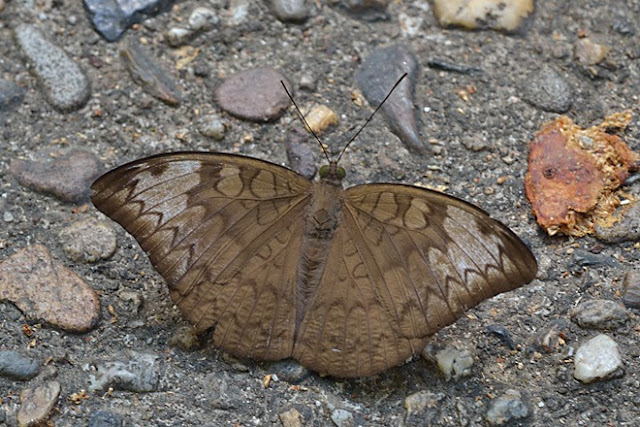 One single Lascar was gliding around and looking for perch. It looks like the Common Lascar (Pantoporia hordonia hordonia). 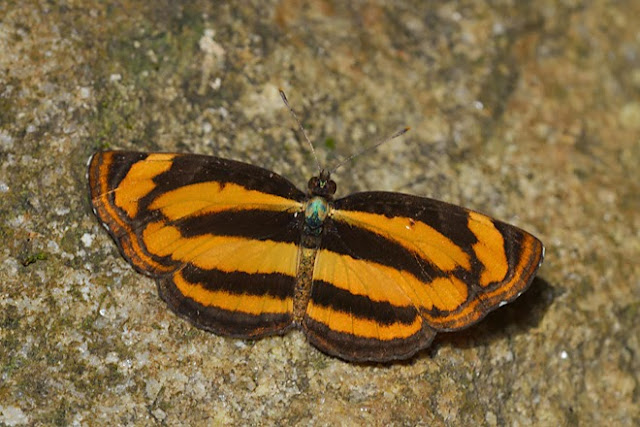 The Intermediate Maplet (Chersonesia intermedia intermedia) is rather small and it kept flipping its wings when it was searching for a sweet pot to puddle. 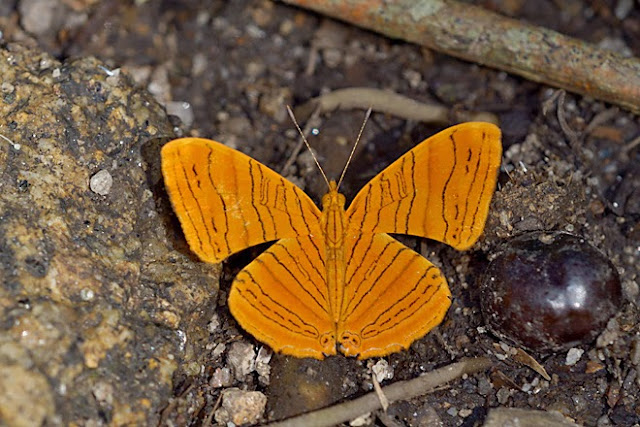 There is a stream not far away in front of our lodge. I had to chase under the hot sun to get some e shots of a rather pristine Staff Sergeant (Athyma selenophora bahula). 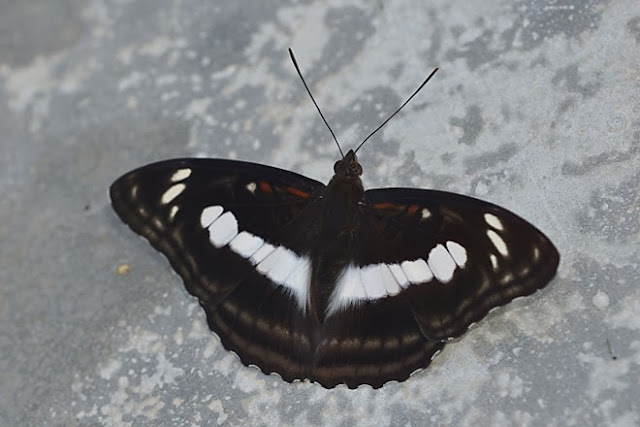 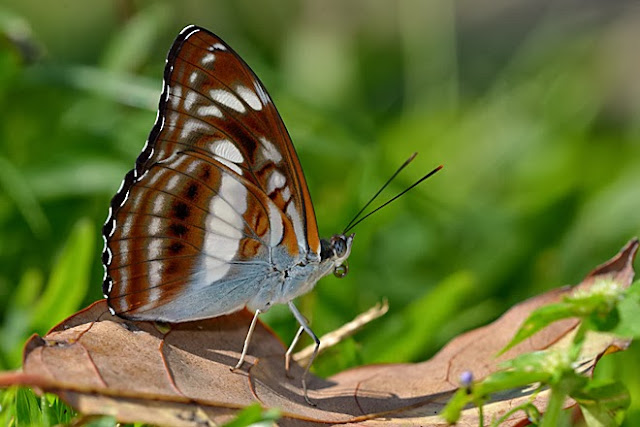 After we have checked into our room in the early afternoon, Antonio drove us up to the mountain and stopped at a waterfall site. The activity was quite low but with patience, we finally spotted two large skippers.

This brown skippper believed to be The Great Shift (Pelopidas assamensis) was found feeding on some birddropping on the concrete wall of a drain. 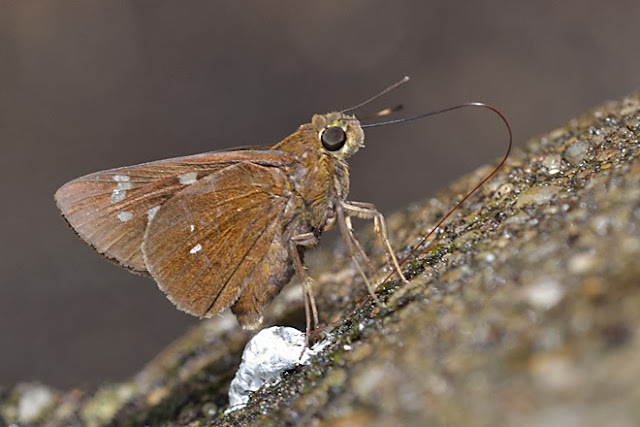 I noticed a black skipper zipping past me when I walked along a stream. We were really excited when this rather large and dark skipper was attracted by some smelly stuff on the ground next to a drain - this is The Nonsuch Palmer (Creteus cyrina cyrina) skipper showing its very unique hairy legs. 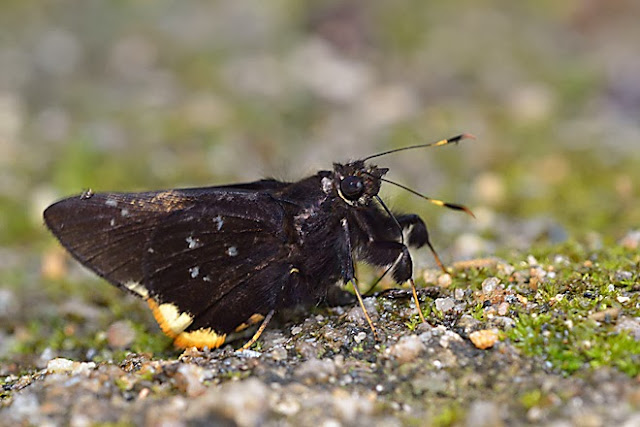 As it was rather tame and stayed still, we "climbed" over the drain and took some shot from the other side with the dirt road as the background. 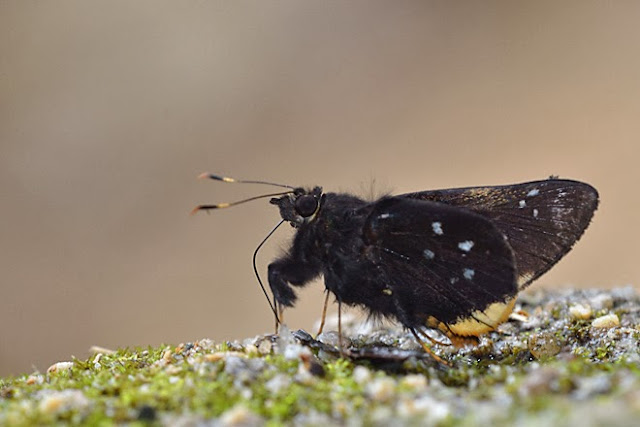 At the sandy patch along the downstream of the waterfall, we spotted a small light brown but a bit worn-out skipper. Dr Seow from the ButterflyCircle helped me to identify it as The Siamese Bush Ace (Onryza siamica). 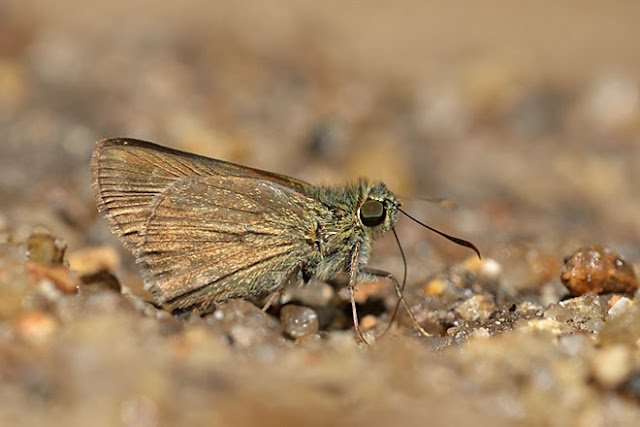 Antonio's car showed sign of losing engine power when it was going up deep slopes. He decided to park his car on the road side. Two of us continued walking up the hill, hoping to spot some montane species.

Antonio spotted this Dark Judy (Abisara fylla fylla) having a friendly perch on a kerb. 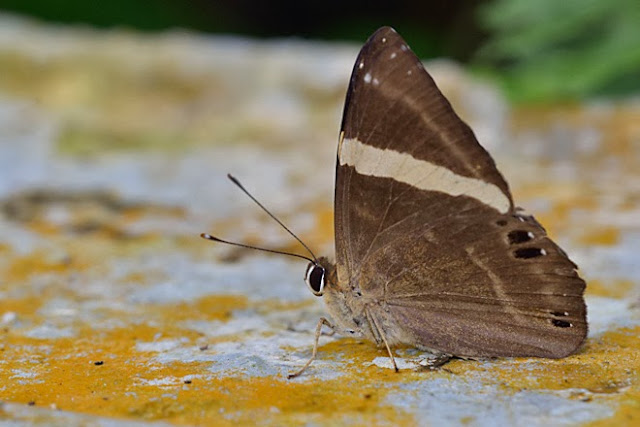 We spotted two Chestnut Tigers (Parantica sita sita). However, I could only get a long-distance shot. 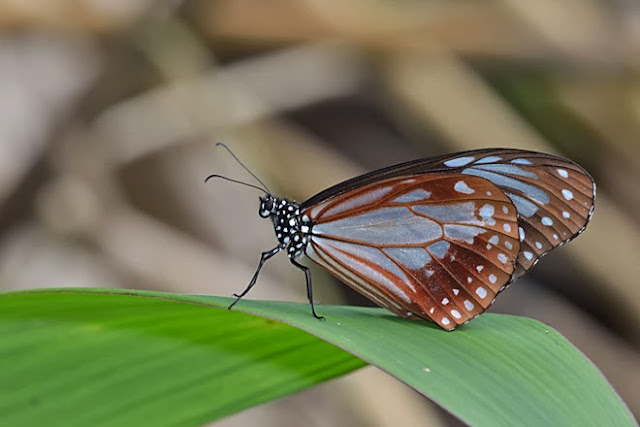 When Antonio and I returning back to where his car was parked, we encountered a Delias-like large butterfly feeding on the Bidens flowers. We chased hard to take some shots. After dinner at the Lodge, Les confirmed that it was The Spotted Sawtooth (Prioneris thestylis thestylis). In contrast, this Himalayan Yellow-banded Flat (Celaenorrhinus dhanada affinis) was tame and it allowed me to take some shots. 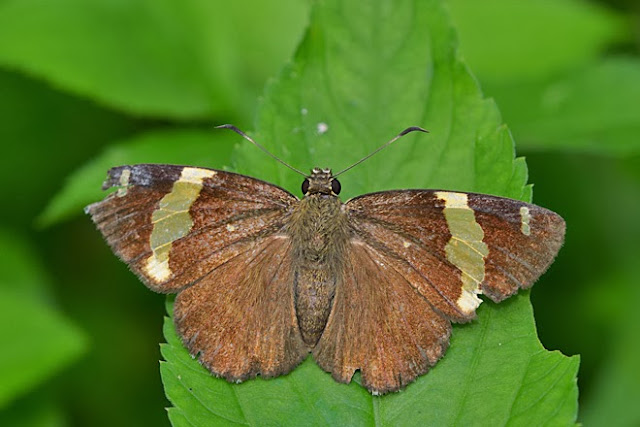 In my next post, I will feature butterflies and a few other critters that I encountered on our 2nd day at Mae Takhrai National Park.
Posted by Federick Ho at 10:28 PM