It was a nice Saturday (16 Nov) morning with diffused sunlight. While I was on a bus to Pulau Ubin, Scast one of  our newest BC members messaged me that he would like to join me at Ubin.


As usual, I went straight to the Butterfly Hill. Next to the NparksVolunteer Centre, I saw many Common Roses (Pachliopta aristolochiae asteris) and a few Common Birdwings fluttering around actively. I could only manage a long-distance shot of  a Common Rose. 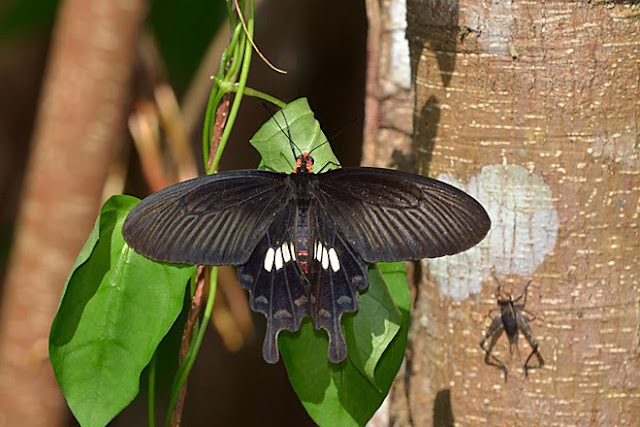 Another Common Rose was seen feeding hastily on some flowers of the Common Snakeweed (Stachytarpheta indica) at the Butterfly Hill - its flapping-wings were just too fast for the shutter speed. 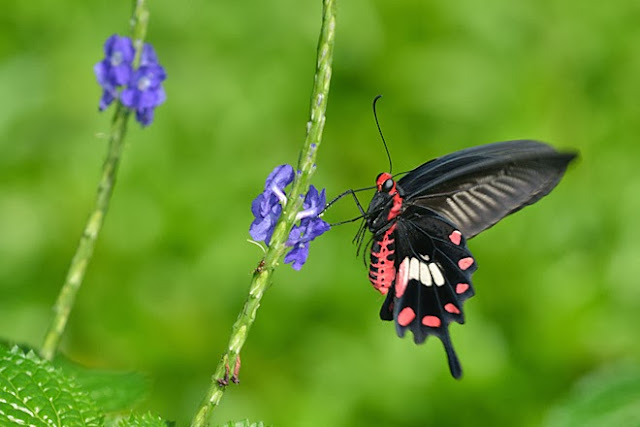 It was a rare sight to see quite a number of Birdwings fluttering gracefully and feeding on Ixora flowers at the Butterfly Hill. But getting a good shot was a challenge for me and I didn't have the motivation waiting and chasing for a better shot. 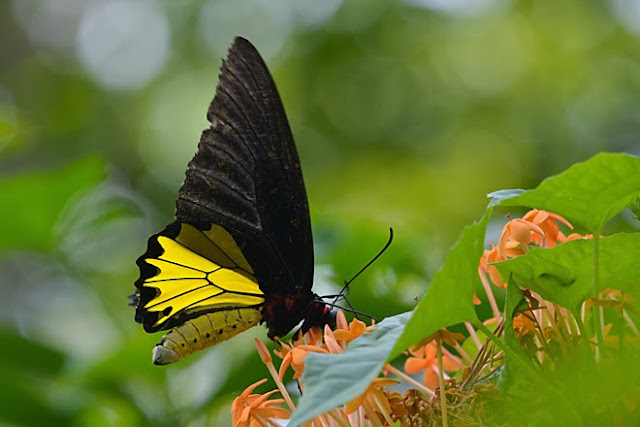 One Birdwing caught my eye. So when it perched on a leaf, I quickly stepped forwards and snapped some shots. It was a male Troides amphyrysus ruficollis (Malayan Birdwing) - my first shot of this species in Singapore. 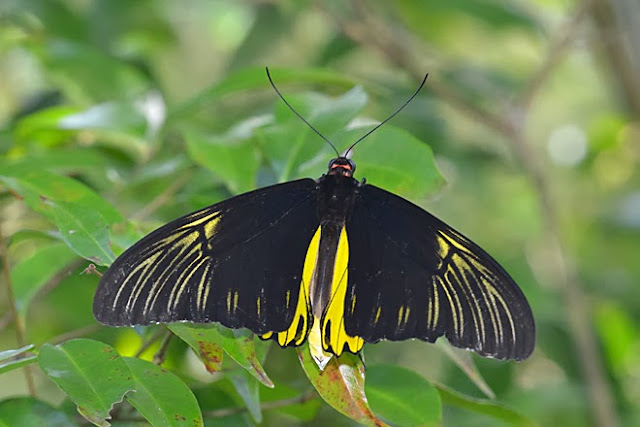 This Blue Glassy Tiger (Ideopsis vulgaris macrina ) was seen "hanging in the air" - I wondered why ? When I went in closer and took a shot, it dropped off and flew away. Guess what I saw ? 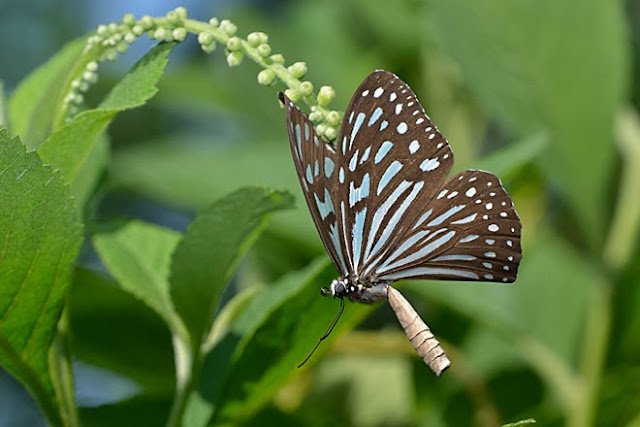 Yes, I saw a white crab spider. Perhaps it was grabbing the butterfly's wings and it freed the butterfly when the camera flash light was fired. 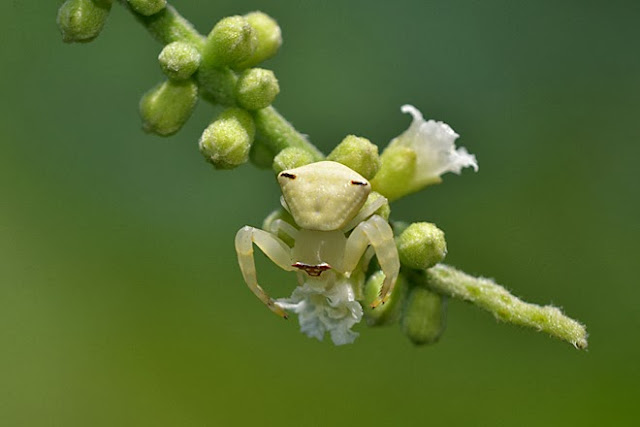 Scast and his friend arrived at Ubin around 10:15 am and I showed them where the Butterfly Hill is. Shortly after that, I moved towards Chek Jawa as trekking was my main objective in this outing (to prepare for my trekking trip in Hong Kong). Some butterfly shots were taken along the the way if I found them cooperative enough.

The perch of this Grey Pansy (Junonia atlites atlites) tempted me to take a few shots. 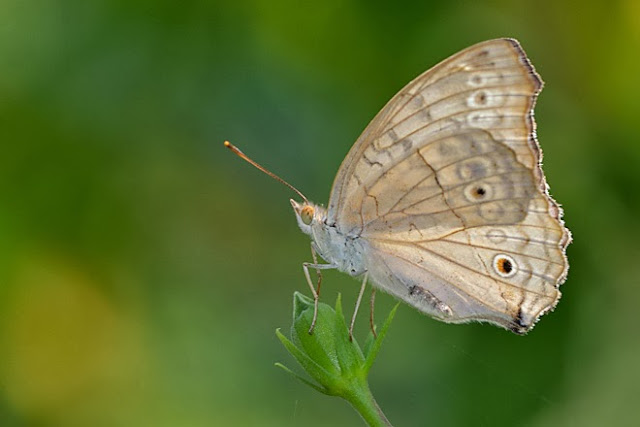 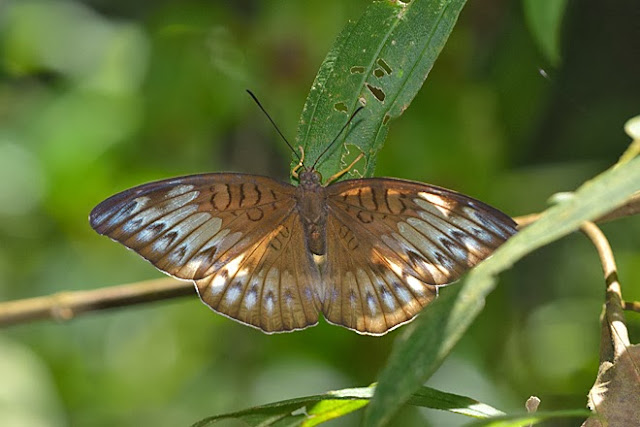 Yes, she did eventually- a single egg was laid at the tip of a Singapore Rhododendron leaf. 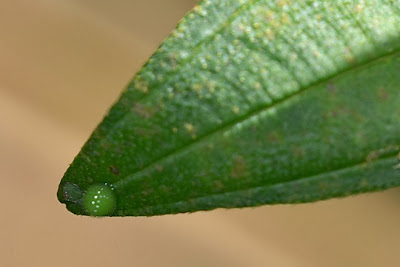 Just outside the Chek Jawa, a Dart (Potanthus ganda)  was sunbathing with wings open. 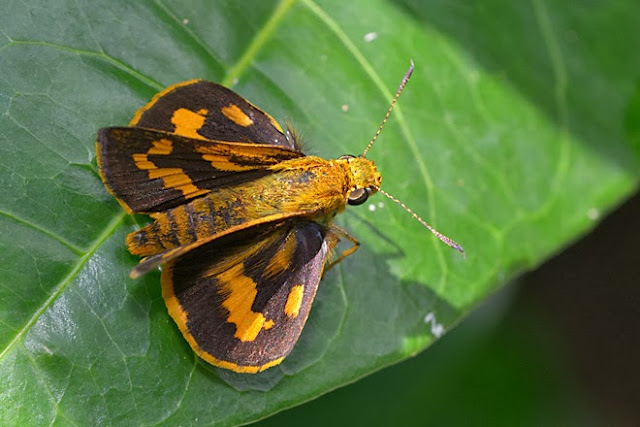 This Dart has the habit of opening its wings whenever it settled on a new perch. My effort of getting an underside shot paid off when I reacted very quickly to a new perch. I encountered very few butterflies on my way back to Butterfly Hill where I met up with Scast and his friend again. We had a quick lunch at a Muslim stall near the jetty. After lunch, I showed them where the Sensory Trail is. 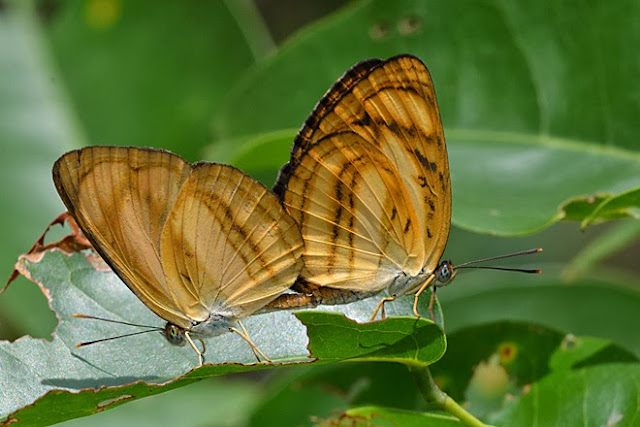 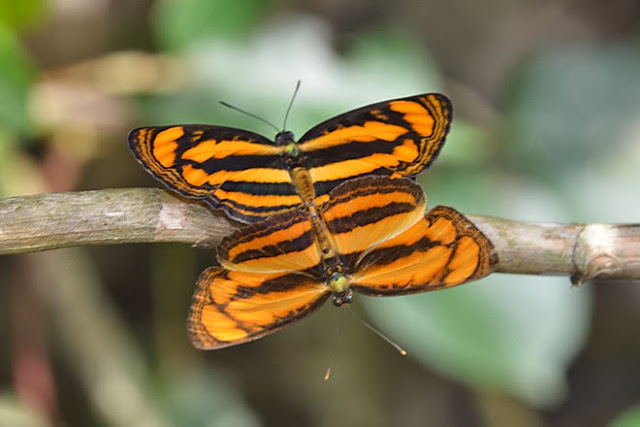 This blue bee was busy collecting pollen next to the Parak Lascar. 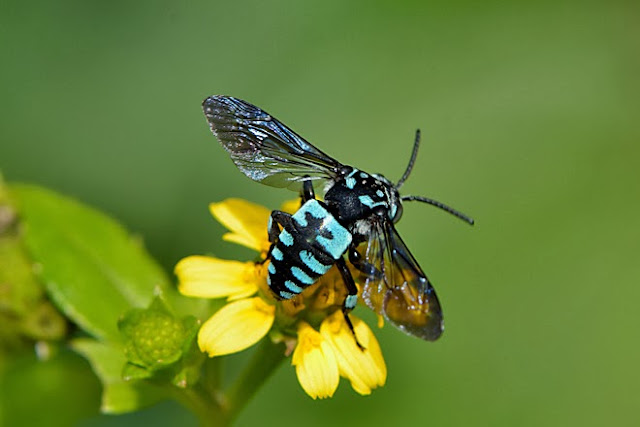 I hope I have luck next time to get at least a record shot of  a flying jewel that appeared new to me. Let us keep Ubin as the way it is now - a treasure trove of biodiversity waiting to be uncovered.
Posted by Federick Ho at 9:02 AM