I arrived at the Dairy Farm Nature Park (DFNP) on 22 Dec before 10 am. I decided to make a detour to explore the Wallace Trail instead of going straight to the location where we usually hunt for butterflies. It was a pity that part of the Wallace Trail was cordoned off due to soil erosion.


My first shot of the morning was this Ultra Flat (Tagiades ultra) feeding  on the Pagoda flowers. It appeared to be a regular visitor to DFNP as I have seen it a few times at the same place. 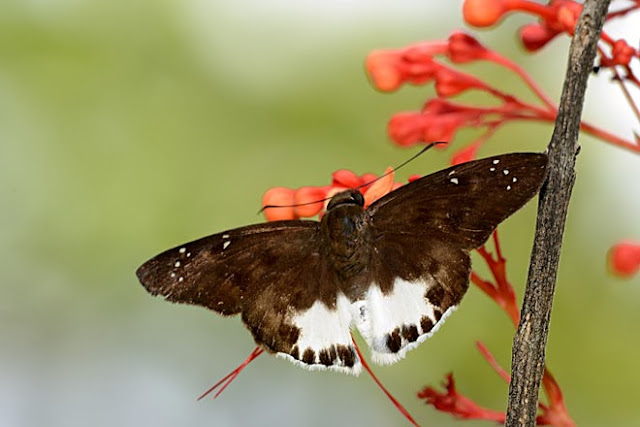 Next came a female Cruiser (Vidula dejone erotella) busy feeding on the Lantana flowers but she was just too active for me to take a better shot. 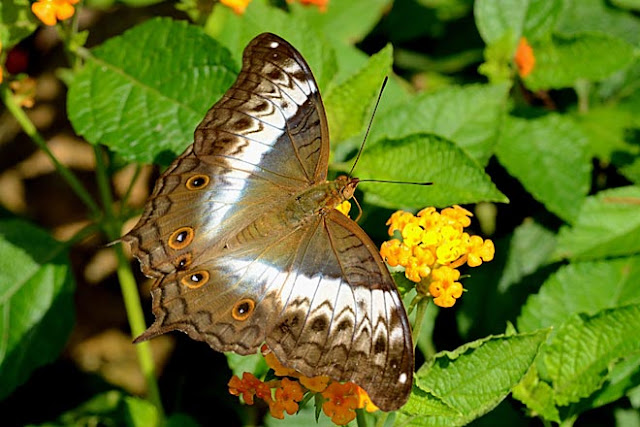 A male Common Mormon (Papilio polytes romulus) was flapping its wings in high speed in mid-air while feeding on the Pagoda flowers - despite using a fast shutter speed, I still could not freeze its wings completely. 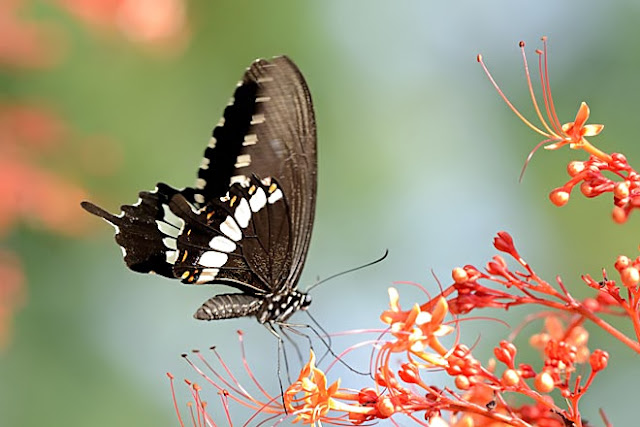 The Painted Jezebel (Delias hyparete metarete) is a very common butterfly that prefers to stay and even feed at the canopy level. 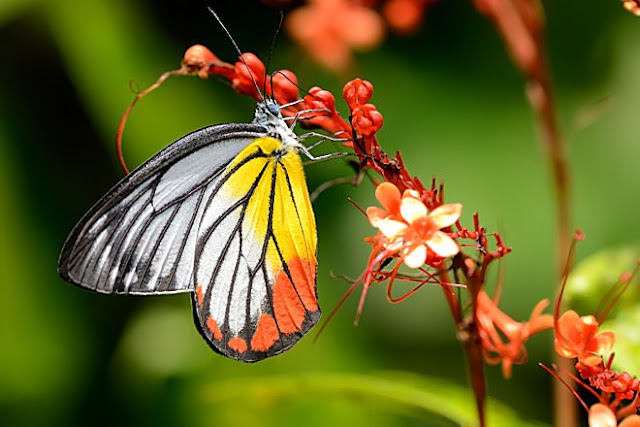 At around 11 am, all the butterflies disappeared suddenly so I walked towards Zhenghua Park to meet up with CH. What a lousy day for us at this particular location where we used to see many puddling butterflies. So, we decided to go elsewhere - Mandai Park Connector.

Thanks CH for giving me a lift to Mandai. This small but interesting beetle caught my attention while it was moving along the edge of the leaf initially. 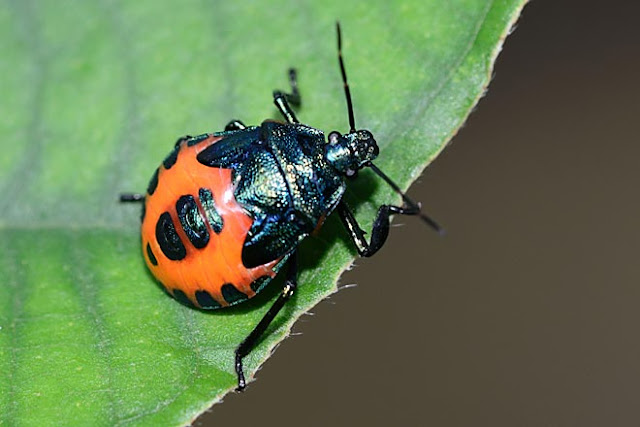 CH spotted an Acacia Blue (Surendra virvarna amisana) on a Ginger flower. In fact, when we looked closely, there were at least three different individuals feeding on a bush of ginger plants there. I like this shot as these ants inject some 'dynamism and live " into a picture. 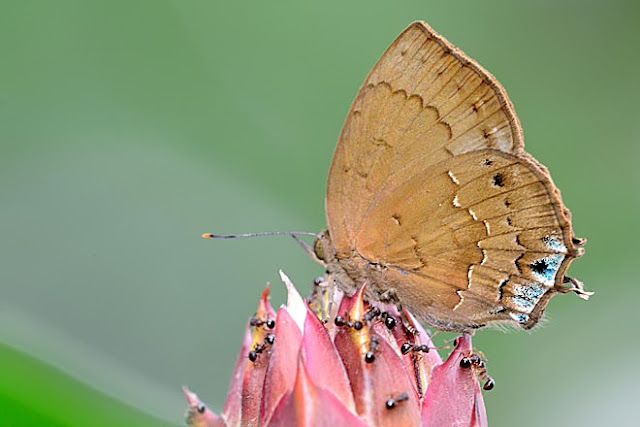 Here is another shot which looks "static" without the ants. 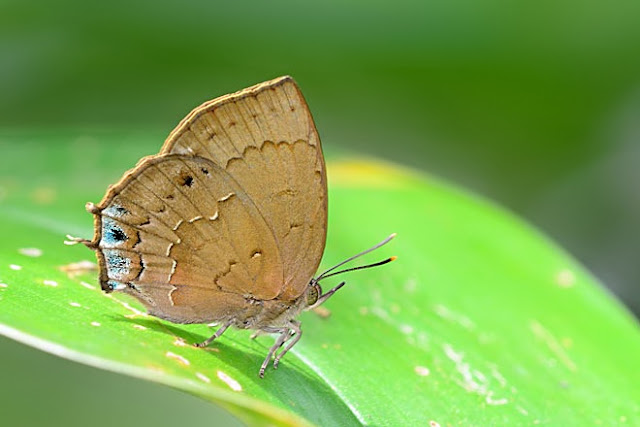 We saw a few larvae. One of them looked like a late instar larva of the Orange Emigrant (Catopsilia scylla cornelia) found on a Senna biflora shrub. 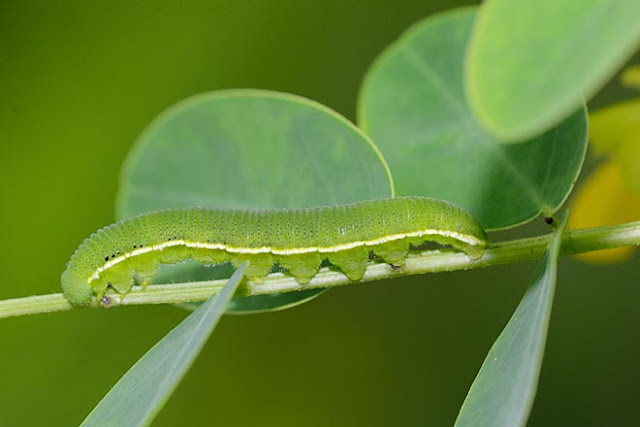 A rather pristine brown skipper, probably Caltoris bromus was resting in a shade. The little blue tint on the abdomen surprised me. It quietly disappeared from our sight when we want to take more shots. Update : this may be a female Caltoris cahira austeni ( the larger rounded FW spots & dark brown scaling on the HW indicate this - commented by Dr Seow) 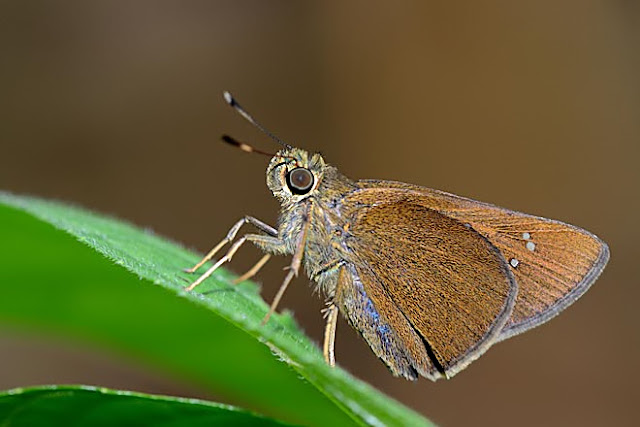 This should be my last blog write-up for the year 2012 - it has been tough and time-consuming to update this blog regularly since December 2008. At this juncture, a thought flashes through my mind - should I continue with the same diary-writing style, featuring most of my outing shots or post only "interesting" shots and more selectively as many species of the flora and fauna have been posted many times. Well, I need to reflect and think about it.

Wishing everyone a Happy New Year and a fruitful 2013.
Posted by Federick Ho at 11:55 PM