It has been a few months since my last visit to Upper Seletar Reservoir (USR) Park. On a super hot weekday morning, after clearing some work, I decided to drop by this popular hunting ground for many butterfly photographers.

At a shady place near a stream, a Leea indica shrub was flowering though not profusely but good enough to attract quite a number of Pyroneura latoia latoia (Yellow Vein Lancer) to feed on the tiny white flowers.

What a pity that the hindwing apical area was torn otherwise this was a lovely shot that I like very much. 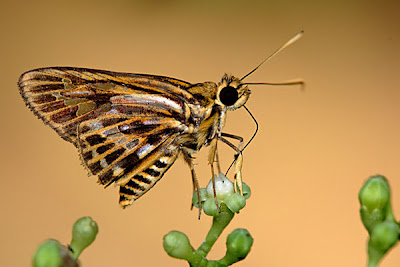 There were at least half a dozen Yellow Vein Lancers. As the common name suggests, the veins of the wings are yellow in colour and can be seen quite clearly, making this species easily identifiable in the field. Here is another shot of a different individual. Make a guess of the background of the shots. (Answer will be given later) 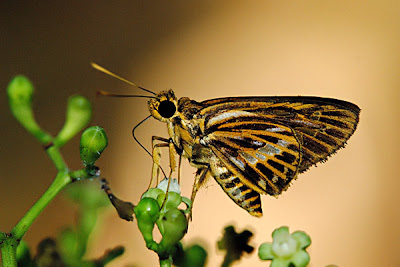 I only saw this rare skipper Suastus everyx everyx a couple of times in the past few years. But each time I had no chance to snap a shot. I was very lucky that the "Butterfly Fairy" smiled on me and made this particular specimen appear and land on a leaf in front of me, never mind it was so suddently and in the shade. After getting a record shot, I tried to steady myself, very consciously holding my breath, making sure no shaking, snapping a few shots at a very low shutter speed of 1/40, f8. 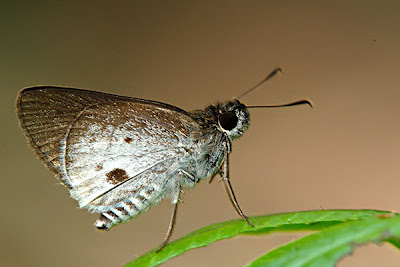 This is quite a small skipper. Its underside hindwing is predominantly pale whitish in colour with a large and prominent brown spot near space 1b. Also, the brownish dusted markings from hindwing apex to costal area make this skipper quite uniquely different from other brown or orange skippers. 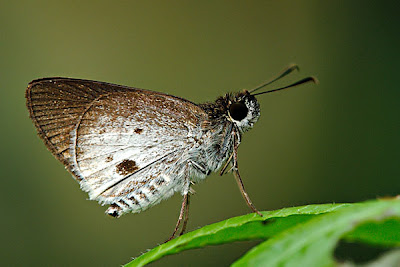 This Tagiades japetus atticus (Common Snow Flat) was spotted feeding on another flowering Leea indica high up. A fierce Yellow Vein Lancer came and chased it away, forcing this Common Snow Flat to perch on the underside of a Leea indica leaf, just above my eye level - it was not a desirable angle to take any shot. A dark brown skipper with some small white spots near the forewing apex, Common Snow Flat tends to perch with its wings open and flat on the leaf. 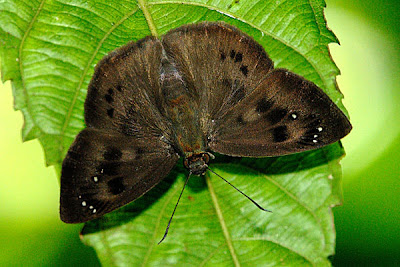 There were at least a dozen of this tailless Arhopala species hanging around along a shady forest trail. Most of them were so alert that I could not get closer to them. When in flight, the metallic blue upperside could be seen quite clearly but I was not sure how big the blue patches were. This was suspected to be a Arhopala major major. 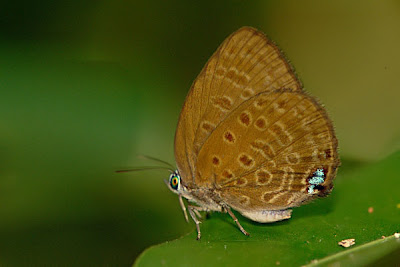 A rather common damselfly in our forest, this not-so-big damselfly looks like a Prodasineura notostigma. Due to its rather dark abdomen and lack of striking colours, we might not notice its presence in front of us if we were not observant enough. They tend to perch on the tip of a leaf and did not fly far between perch. 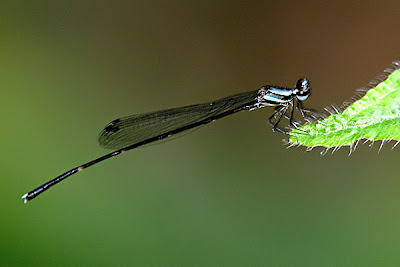 There was a bunch of moth caterpillars hiding underneath a leaf. I have seen these caterpillars on the same leaf before but I have yet to find out what they are, both the leaf and the caterpillars. 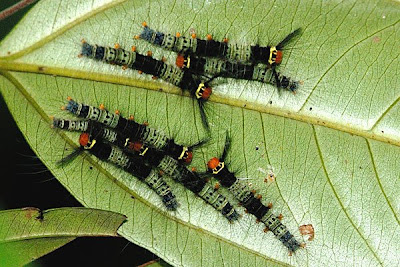 This shot was taken along a shady forest trail. The surface of the foliage appeared to be eaten by these beetles (?). 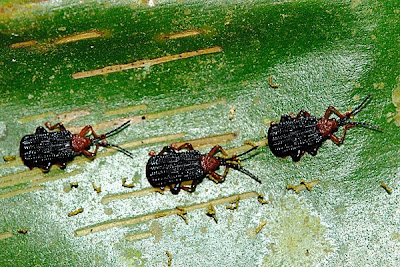 This is likely a female dragonfly. I took this dorsal shot near a grass patch along the forest edge, hopefully someone would identify the species. 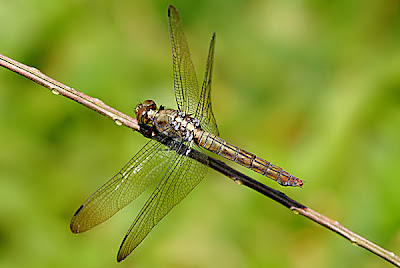 More often then not, I encountered common forest butterflies at USR. But it is still one of the best forested areas that a rare species may just appear in front of us.
Posted by Federick Ho at 10:34 PM